If you give it a tiny bit of thought you will quickly notice that business success and sports success are related in many ways. I like the sports analogy because most people have seen sports and can relate.

I watched the Super Bowl between the Chiefs and 49ers. It was a great game. The Kansas City Chiefs came back at the end of the game to win with 21 straight points in the fourth quarter. This comeback literally happened in the last five minutes of the fourth quarter.

Now, watching this game made me think of how business and sports are so similar. You are probably very curious as to how since I’ve already mentioned this twice in this article. Allow me to explain.

Highs and Lows of Success

We all go through periods of highs and lows. Enter the Super Bowl to teach the lesson of highs and lows perfectly. Everyone expected this game to be a super high scoring game. In fact, Vegas has a line called the over/under and you bet whether you think there's going to be more total points or less total points. the over/under for this game was 55. They expected this to be a very high scoring game because both teams have explosive offenses and great quarterbacks at the helm.

What happened in the first half was unforeseen. Neither team really performed to the level that one would expect from Super Bowl quality teams. That got me thinking about business and how there are times when we perform at a really high level and there are times that our performance is not quite as good. But that's why you should never ever give up.

It is easy to give up. It really is. You can put the bad behind you, right? But is it really behind you? Are you going to stop thinking about those failures? Instead of giving up, might I suggest you simply try harder?

Never Give Up On Success

We require specific directions in order to find a location within a city. Just knowing the city is generally not enough unless you’re looking for some major landmark that is well-known to society. By receiving specific directions you can make a plan to reach your destination, even insuring you arrive at a specific time fo day.

It's the same thing with goals. It's the real reason why we have goals. We need goals to guide us where we want to go. Quite frankly, without goals, most of us would forget what we wanted to accomplish. Goals give us the focus we need.

Keep Your Eye on the Prize

No matter what happens, keep your eye on the end results that you want. Remind yourself constantly why you are heading a certain direction. Be specific, because the right goal actually matters.

They made adjustments along the way. They changed the way things were working. And it just worked. It just fixed things. The quarterback suddenly started to be inspirational. That got his defense to be even more behind him than they were before. It was huge. They all worked together to accomplish the ultimate goal.

That's why you need to be willing to adjust the things that you're doing in your business in order to achieve your goals. If you're not adjusting, you're not going to hit those goals. Avoid the temptation to hunker down and stick to the same approach over and over again. Be open to change your approach when it is necessary. Being stubborn and resisting change is not going to get you anywhere.

Be a Clutch Player

Book A call
Scroll to Top 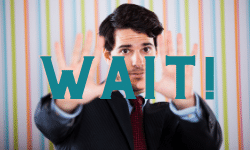